Our office is open to the public; masks are optional, but anyone feeling sick or running a fever are discouraged from coming to our office.

Find this article at:
go.ncsu.edu/readext?305640
— Written By Kaitlyn Johnson and last updated by Deborah McGiffin

Trimming your goats’ hooves is a task that can be easily learned, however, the challenging part is committing to following a timely schedule for trimming. Many foot and leg issues arise from the lack of hoof trimming or improper trimming techniques. The amount of time between trimmings varies depending on a variety of factors, including the terrain the animals are on, the age of the goat, level of activity, nutritional level and even the breed. Goats that are raised in smaller pastures that are “clean” (relatively free of debris and rocks) or in confinement will typically require more frequent trimmings than goats that are raised on vast pastures and pastures that contain things for the animals to climb on. Each animal will require observation to determine when the hoof needs to be trimmed, there is no set trimming interval. Once you become familiar with how the hoof is supposed to look, it will become easier to identify when it is needed. A properly trimmed hoof should look like that of a newborn kid.

The tools recommended to trim hoofs include: gloves, a set of hoof shears that have sharp edges, and a way to restrain the animal. Some optional items include: a rasp, a hoof knife with a sharp edge, some iodine, turpentine, or copper sulfate. The latter is typically used in treating foot rot, foot scald or abscesses.

The first step in trimming is to clean off the hoof, so that it is free of dirt and debris. Besides being easier to see, a clean foot will not dull the shears edge as fast as a dirty foot. The next step is to remove any rim or excess growth from the walls of the foot. The wall may have grown and folded back under the foot. In this case some of the overlapped toe will have to be cut back so that the rim of the wall can be removed properly. The trimming of the wall and toe should be done using shears, the heel and sole can be cut using shears but some find it easier to use a hoof knife. All depends on what you have on hand and prefer. If you choose to use the hoof knife, always cut away from the goat and yourself. The sole should be trimmed down in this slices until the heel, sole and wall form a flat surface upon which the goat should stand at a correct angle of about 45 degrees. Stop trimming as soon as the sole begins to appear a pinkish color, this means you are getting close to the “quick”. Any further trimming will cause the foot to bleed. If you do happen to cut to close a disinfectant such as iodine should be used. In most cases after the application of iodine the weight of the goat itself will put pressure on the cut and stop the bleeding.

If the hooves have been neglected for some time, and 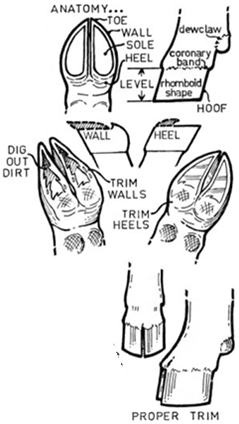 the toes are very long it is usually not practical to try to bring them back to normal in one trimming. It is generally better to trim a little at a time to gradually bring them back to proper shape, size and angle with more frequent trimmings. A good rule of thumb is to keep the hair line of the hoof almost parallel to the ground and the more often trimming is done the less time and energy per trimming it takes, and the more conditioned the animals will be to trimming. This in most cases will lead to better behaved goats and decreased chance of the animal developing foot problems.

In summary, a conscientious effort at a good foot care program will keep goats looking better, healthier and more productive.

We also have a few other email lists you can subscribe to.